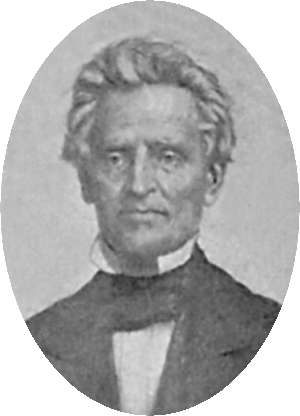 One of the most inspirational individuals of the American Restoration movement was John ‘Raccoon’ Smith.  This preacher from the backwoods of Kentucky proclaimed freedom in the gospel of Christ and the unity of believers based on the Word of God.  His example of devotion to the truth despite hardships and sufferings is worthy of consideration and imitation.

Smith was born on October 15, 1784 on the frontier near modern day Bristol, Tennessee.  He was a child of pioneer parents who had crossed the Appalachians from Virginia.  The hard work of farming in the wilderness as well as isolation from schools did not allow Smith many opportunities for formal education.  In spite these handicaps, he had a love for learning, a quick wit, and a logical mind that served him well.  The only books in the Smith cabin were a hymn book, the Bible and a copy of the Philadelphia Confession of Faith.  Smith’s people were strict Calvinistic Baptists.  Smith did not doubt the faith and devotion of his parents but he questioned whether salvation was dependent on a mysterious operation of the Holy Spirit.  Smith was also repulsed by scenes of “experiences” he had witnessed at Methodist and Presbyterian revivals.

Despite his objections to “experimental religion,” as it was called, Smith persuaded himself that he was one of the elect.  He related his “experience” and was received by a local Baptist congregation.  A few years after his “getting religion,” Smith became a preacher among the Baptist associations in Kentucky.  But Smith was troubled by the contradictions he found between the Word of God and the “Confession.”

These troubles of the mind were severely accentuated by the tragic deaths of his two oldest children in a fire in 1814.  The news of their deaths reached Smith as he was out preaching, but his mental anguish was compounded by his realization that there was nothing in Calvin=s doctrine of election that could give him consolation and reassurance that his children were safe with God.  Unable to give a word of comfort to his grieving wife, she died a short time later.  These personal tragedies wore hard on Smith but they forced him to critically examine the creed of his faith in the light of Scripture.

It was following this tragedy that Smith acquired his nickname.   Arriving in Kentucky after a long and weary horse ride and still depressed over the recent deaths of his wife and children, Smith introduced himself at a summer camp meeting: “I am John Smith, from Stockton’s Valley.  In more recent years, I have lived in Wayne, among the rocks and hills of the Cumberland.  Down there, saltpeter caves abound, and raccoons make their homes.  On that wild frontier we never had good schools, nor many books; consequently, I stand before you today a man without an education.” (Williams, 115).  Though uneducated, his preaching caused such a stir that people invited neighbors to come and hear “the preacher raised among the ‘coons.”  He was ever after known as Raccoon John Smith.

In 1822, Smith’s questions about the inconsistency of the doctrines of Calvinism and the Bible caused him to suddenly stop his preaching one night and admit to his listeners: “Brethren, something is wrong;  I am in the dark; we are all in the dark; but how to lead you to the light, or to find the way myself before God, I know not.” (145).    Smith went home and poured out his confusion in prayer to God.  He pledged to heaven and his second wife, Nancy, that he would take God’s Word as his only guide, examine it carefully and follow its teachings wherever they might lead him.  Smith began the long and uncertain path out of Calvinism.  Smith’s search for the truth received assistance when he became acquainted with the writings of Alexander Campbell a few years later.   Faithful to his pledge, his systematic examination of the Scriptures and his logical mind led him to conclude that the system of Calvin which he had so long preached was “a doctrine of wind,” with no foundation in the Bible (147).

A record of Smith’s preaching activity in 1828 reveals the determination of a man “constantly going” in his zeal for the Gospel.  He delivered 523 sermons, held three public debates, and numerous exhortations.  Though he had pessimistically confessed his doubts as to ever seeing fruit come from his labors, he reported the results of his preaching to his wife: “Nancy, I have baptized seven hundred sinners, and capsized fifteen hundred Baptists . . .” (258).  This swaying of many Baptists to the cause of Restoration upset Baptist associations in the state of Kentucky.

John Smith preached more than 50 years, ranging throughout the state of Kentucky and into Tennessee, Alabama, Ohio, and Missouri.  He died February 28, 1868 at the home of a daughter living in Mexico, Missouri.  His humble zeal led hundreds to follow his example and turn from error to believe and obey the truth.