The contributions of women have been a neglected area of study in the Restoration movement.  This is unfortunate because many women have had significant roles in the cause of Christ and the restoring of New Testament Christianity.  This article will highlight the labors of a west Tennessee woman whose influence for good in the lives of many young people has nearly been forgotten yet whose story still has a capacity to inspire.

In the first half of the 20th century, for nearly 40 years, Jennie Williams Douglas authored a children's column in the Christian Leader.  In the paper published in Cincinnati, she was known as "Cousin Jennie" to her young readers.  "Cousin Jennie" of Puryear, Tennessee proved to be a valuable friend to children as she combined sage advice and wisdom with a heart for leading her "little cousins" to greater service and devotion to God. 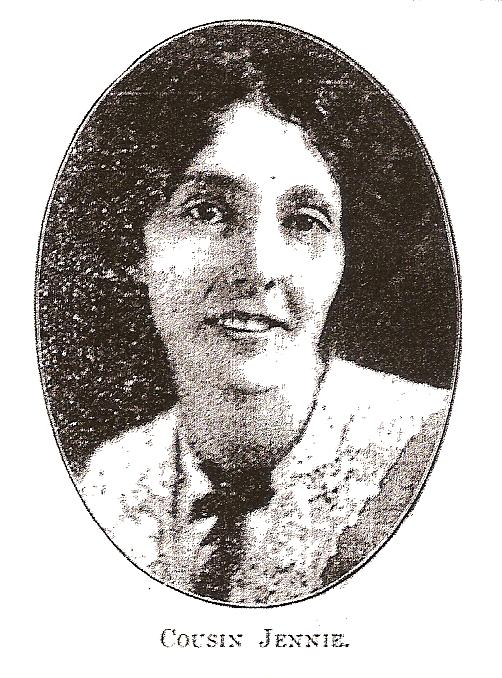 In the late 1940's she offered this self portrait to her fellow citizens of Puryear, Tennessee.  "Jennie Williams Douglas is one Tennessee woman who is not personally concerned over unemployment insurance nor age Pension.  The late forties do not betray her age except her hair, once raven is now almost white.  She writes copy for newspaper, putting out in long hand from 2,000 to 10,000 words per week.  She teaches a Bible class of 12 little folks on Sundays, tutors certain week days, manages a club for farm boys and girls, belongs to clubs in town and county, resides on a farm; has flowers, chickens, pheasants, cats and dogs; sells dairy products, does cooking for herself and her husband and for occasional hired farm help and many visitors.  She sews, crochets, knits and embroiders.  She has pieced during autumn and winter, six fancy quilts.  For diversion she takes almost daily walks to town two miles from her house, visits, plays guitar.  She once rode and drove horses until cars came." (Self Portrait).

The Children's Column first appeared in the Christian Leader in December 1912.  Fred Rowe, owner of the paper, accepted the request from Jennie W. Douglas, to have something specific for children in the paper.  In one article, "Cousin Jennie" shared her vision for the column.  "This department is for you young people.  Write of anything in which you are interested, your homes, books, pets, family happenings of any kind.  Especially do we want to know what you are doing for Jesus.  We want to help the young people, encourage them in a Christian life, to teach them to believe that God rules, that Jesus died to save us from endless hell, that life is joyous and good because it is a gift from our Heavenly Father, and that there is goodness, righteousness, peace, hope, joy, and love.  This is the mission of this little department, for which Bro. Rowe and Cousin Jennie work hard and faithfully.  Many older people write me they are benefited also by your cheery letters." (Douglas, 1924, 15).

Because of her talent and dedication, the "Children's Column" enjoyed success and a large readership over the life of the paper.  Each week children would anticipate the arrival of the Leader and turn to the back pages to search for their column.  Typically, the column would begin with a paragraph from "Cousin Jennie."  "Suppose each one of you join a Happiness Club for the summer.  Try to bring happiness to some person or some animal each day.  Bring father a glass of cold water; put a fresh cushion in mother's chair; be patient with little sister or brother who is fretful or ill.  Be kind to the dogs, the cats, the birds around your home.  Put out fresh water every hour or two for the birds, if there is no pool or running water near your home.  Kindness is love and the scriptures say, 'Love is the greatest of all things.'  Lovingly, Cousine Jennie." (Douglas, 1937, 16).

The "little cousins" would write brief notes.  These notes would be copied, edited if necessary and appended to the initial paragraph.  "Cousine Jennie" included a brief reply to each note and forwarded them to Cincinnait where they were published.  "Dear Cousin Jennie,  I am a little girl seven years old.  I am in the second grade of school.  I went to school last winter at the Alabama Christian College.  My teacher was Mrs. Arthur B. Tenney.  Miss Tenney taught us many Bible stories which we will never forget.  Since then, the College has been sold, but we have a good school, although they do not teach us the Bible.  Mamma and papa are members of the church of Christ.  Papa is also a preacher.  I have two sisters and one little brother.  Little brother, Flavil, says he is going to sing and preach like papa when he gets large enough.  With love to all the cousins.  I wrote this letter on papa's typewriter.  Gracie Nichols, Berry, Ala." "And nicely written it is, indeed.  Tell Flavil to write to us." (Douglas, Jan. 1, 1923, 15).

"Cousin Jennie" directed young people to look to the needs of others through their column.  She called it "missionary work" as she and the children would set aside pennies, nickels, and dimes to be used for support of missionaries or for annual gifts for the children at Potter's Children's home.  "The first missionary work done by the column was collecting a sum for the widow of Bro. Bishop, who died while a missionary in Japan.  The fund was started by Cousin Vinnie L. Beach, Holton, Ind., who sent me a dime, and asked that it be sent to Sister Bishop, and Vinnie also requested the other cousins to send a dime.  The little cousins responded eagerly, and I believe $10 was sent.  Since that time the column has been continually engaged in missionary work.  It has sent a shower to Potter Orphan Home annually, helped the widows, sick and destitute, and since our nation became involved in the great war it has sent tracts and money to cantonments and furnished other reading matter for the soldiers." (Douglas, 1918, 15).  In addition to the help for missionaries, orphans, and widows, "Cousin Jennie" led her young readers in establishing a circulating library in which dictionaries, books, and old copies of gospel papers could be distributed for reading material.

Jennie Williams Douglas was a child of parents who had pioneered Henry County, Tennessee, and she and her husband had no children.  Since many of her young readers were from rural communities like hers, it was natural that her column focused on life's simpler pleasures.  "Did you ever pat a tired hungry dog on the head and see its tail wag and its eyes sparkle with joy?  Did you ever put food and water outdoors for a lonely bird and hear its love song in rapturous melody when its thirst was quenched and its hunger appeased?  Did you ever give a marble to a little child and see the rapture and friendliness it their eyes?  If not, you have strayed far on the road of selfishness, indolence, and greed.  You have forgotten mother's smile, and sister's tear, brother's song and father's joy of long ago." (Douglas, Dec. 4, 1923, 15).  This focus became even sharper during the "Depression era."  "We are having very little space this summer for our paper is just published twice each month to save expenses and we just can't corwd the grown folks out.  . . .  It is so hot here in W. Tenn., if you breathe very fast you could sweat yourself to death.  I mean perspire.  I have a time getting off to church these hot Sunday mornings.  Sometimes I have some help about my dinner and oftener not.  Last Sunday I creamed some potatoes, cut up a raw cabbage head, sliced some baker's bread, had a berry pie and some iced tea.  My little nephew came home with me and when he sat down to the table he said, 'Aunt Jennie, is this all you've got for dinner?'  I said "No, there is a bucket of cold well water on the back porch and I might slice an onion." (Douglas, Sept. 15,1931, 14).

As Thanksgiving approached in the midst of the Depression, "Cousin Jennie" invied her young readers to consider the pilgrim forefathers and their conditions.  "And if we were to start a conversation about the 'depression,' the 'panic,' the hard times, I imagine the grand and noble old Geo. [Bradfield] would fall upon his knees and pray for the salvation of our sin cursed souls and the sturdy pioneers would shout a fervent 'Amen.'  This has been a fruitful year.  Our fertile fields have produced grain, fruit, and vegetables in abundance.  Forests are now full of grapes, nuts, muscadines, persimmons and 'possums.  Our store rooms are full of canned supplies.  And how thankful we are!  Health, joy of liviing, food, drink, faith in a Living God who watches over us, faith in Jesus the Christ who bore our sins, faith the Holy Power that directs our path;  for friends, loved ones, a shelter we call home.  For these and more, our Father, we thank Thee." (Douglas, Nov. 17, 1931, 30).

Jennie W. Douglas signed each column, "lovingly."  It was appropriate as her column was a labor of love aimed at the formation of Christian character in her readers.  She reminded children to look for the good things and joys of life, even in the reality of sadness and loss.  "My jonquils were in full bloom on Washington's birthday.  This is real early for them to bloom.  I know now that the winter is gone and spring has come.  Just so the dark winter of gloom and sadness will sometimes come into our lives, but the shining rainbow of God's promise is just behind the cloud.  We as his little children, must look for the flowers and the rainbow while traveling on to another life where winters never come." (Douglas, 1930, 14).  Jennie's own life was not immune from "winter" pain and loss.  She suffered physically from tumors that required two major surgeries and she once lost her home and all her belongings in a fire.  She shared the lessons that she learned in these hardships.  "I have been buffeted about by the waves of life till I have found more sunshine than shadows, more roses than thorns.  There is so much good and beauty and holiness in this world God made for us; and we can find it if we look for it." (Douglas, Oct. 6, 1931, 12).  Her Christmas wish to her readers in 1931 spoke of joys found in tears, a lesson mirrored in the gospel message.  "There must be days of sorrow and sadness, when our tears like the raindrops fall and clouds of gloom shut out the sunshine gleam.  There are always more days of gladness and sadness.  Our Heavenly Father sent His only Son into a sin cursed world to bring eternal joy and happiness.  We do not know the day He was born and we are not commanded to celebrate His birth in any special way.  We remember His death, we older ones, by an act of worship every Lord's Day.  We scatter the blessings He brought us by every act of love or kindness or charity.  If we are Christ's we carry the sunshine of His love and gospel message of faith, love and hope in our hearts and we give to others in our pathway." (Douglas, Dec. 22, 1931, 15).

Jennie Williams Douglas died in 1963.  Many of the children who were her little "cousins" have also gone on to their reward.  The Christian Leader and its "Children's column" have long been forgotten.  But for a generation that has been described as the "greatest generation of Americans" by Tom Brokaw, part of their greatness is owed to those who molded their character.  "Cousin Jennie" was one of those molders.  Perhaps her story can motivate others to be molders and makers of Christian character in a new generation.