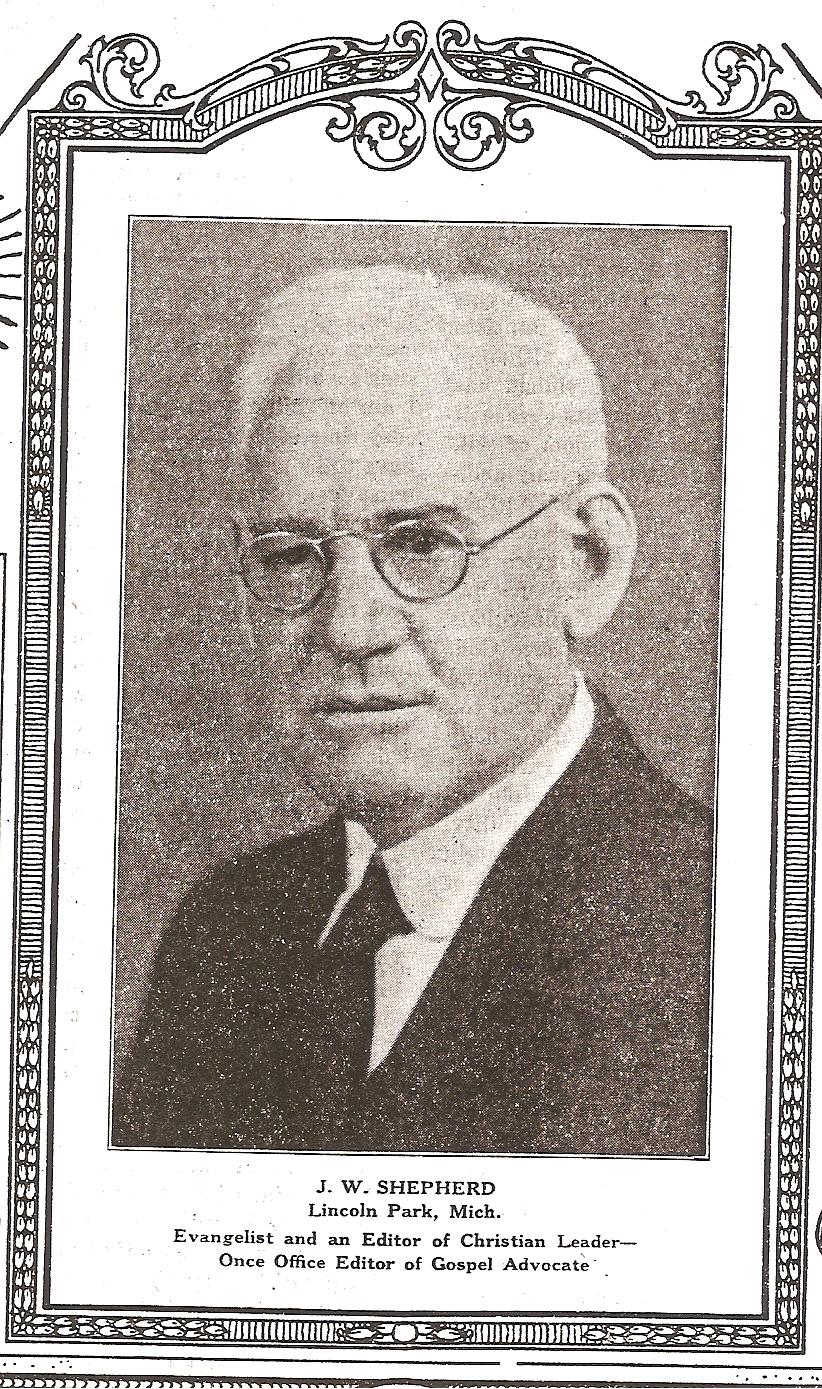 No editor of the Leader enjoyed more national recognition than James Walton Shepherd.(Boles, 26; Goodpasture, 748).  He was baptized by James A. Harding in 1877.  He attended the College of the Bible at Lexington, Kentucky receiving training under the highly regarded teaching trio of J. W. McGarvey, I. B. Grubbs, and Robert Graham.
After his graduation in 1884, Shepherd devoted himself to evangelistic work.  In 1888, Shepherd took his family and traveled to New Zealand and Australia to do mission work.  In 1905 Shepherd became the office editor of the Gospel Advocate.  For the next seven years he was in close contact with David Lipscomb and Elisha Sewell in the golden years of their editorial work on the Advocate.
At the end of 1912 Shepherd resigned as office editor of the Advocate.  This resignation and his subsequent move to Detroit, Michigan in 1914 came as a surprise to his Southern friends.(Pullias, 9).  Among the reasons for the move was an urgent call to locate with the Vinewood congregation in Detroit and physician’s advice that Shepherd’s wife have a change of climate.(Bradley, 9).  Detroit was also the home to one of Shepherd's daughters.  For the next ten years Shepherd was busy in faithful but strenuous service building up the cause of Christ in the Detroit area, working primarily with the Vinewood congregation.(Shepherd, 1924, 7).  Shepherd’s move to Detroit also resulted in his return to the editorial task, joining the Christian Leader staff in August 1914.  Shepherd met with Fred Rowe in Cincinnati for several days to discuss the possibilities of working together.(Rowe, 4).  The meeting proved satisfactory to both men as they shared visions of the future work of the Leader.  Among things discussed was the setting up of a stock company (here was the embryo of the Christian Leader Corporation); publication of tracts and leaflets for free distribution for evangelism; publication of three books Shepherd had in production; and the possibility of Shepherd becoming office manager of the Leader.
Shepherd’s work with the Leader curtailed in mid-twenties when he was asked to obtain the census figures for Churches of Christ in 1926.  After leaving Detroit in 1924, Shepherd preached for churches in Washington, D. C., Richmond, Virginia, Birmingham, Alabama, then returned to Detroit.  In 1935 Shepherd returned to Nashville, locating with the Central Congregation.  In this period he continued to preach, write editorials for the Leader, and edit Lipscomb’s commentary notes.
Shepherd was a prodigious writer.  His years abroad had allowed him to collect books and gather materials for his  Handbook on Baptism, which was published in 1894. Shepherd’s “Handbook” was a virtual reference library on the subject of baptism.  J. A. Harding wrote the introduction to the book: "Mr. J. W. Shepherd, the compiler of the materials and the editor of the book, has given us by far the fullest, the best arranged, and most valuable collection of learned testimonies on the action, subjects, and design of baptism ever published in a single volume." (Shepherd, Handbook, 20).  Because the book contained citations from more than 400 respected religious authorities it became a valuable reference book in libraries of preachers and debaters in Churches of Christ.
In 1910 Shepherd edited and published Queries and Answers.  It was a topical compilation of the best of David Lipscomb’s writings during the forty plus years that he handled the “Query Department” of the Gospel Advocate.  Three years later Shepherd edited Salvation from Sin.  This was another topical collection drawn from Lipscomb’s 47 years of editorial work with the Advocate.  David Lipscomb, shortly before his death, entrusted his unfinished commentary notes on the Epistles to Shepherd.  The ability and integrity of Shepherd which had been demonstrated in the earlier compilations were now put to the task of organizing and expanding the notes, many of which were very brief and in need of elaboration.  The result was that Shepherd edited and published five volumes of Lipscomb’s Commentary on the Epistles.  Shepherd died before the completion of the sixth volume.  These volumes formed the backbone of the Gospel Advocate Commentary series on the New Testament.
The predominant theme of Shepherd’s writing for the Leader was ecclesiology.  In January 1915 Shepherd compiled What is the New Testament Church?  The book was a written discussion which had been published in the Gospel Advocate in 1898-1899, between F. D. Srygley and J. N. Hall on the proposition: “The same process that makes one a Christian, adds him to the One Body - the Church.”  Because of demand to put the discussion in a more accessible book form, Shepherd compiled the material and Fred Rowe published it.  Shepherd gave this opinion of the discussion: "This book ought to take the question discussed out of the realm of controversy, and put it among the things definitely settled among thinkers.  If this is not the case, then it is difficult to see how such a question could be settled." (Cain, 8).
Beginning in 1916 Shepherd wrote sixty-six articles for the Leader which would be published in 1929 by Fred Rowe in book form as The Church, The Falling Away and The Restoration.  For some reason the writings had not been put into book form until the twenties.  The articles were re-issued beginning in May 1927.  The book was orginally published by Rowe, then later reprinted by the Gospel Advocate Company.  It's enduring value is demonstrated by the fact that it is still in print.  Shepherd explained why the historical study was important: "If God overrules in human affairs, and teaches men by means of history, then he who faithfully records historic facts fulfills an important service in the education of men." (Shepherd, Restoration, preface). 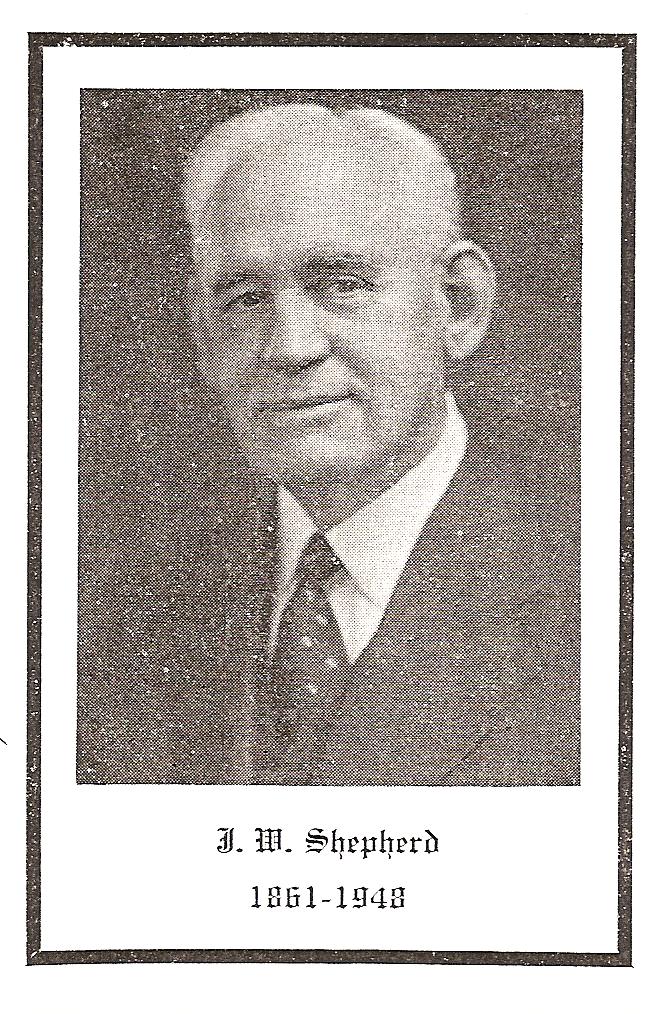