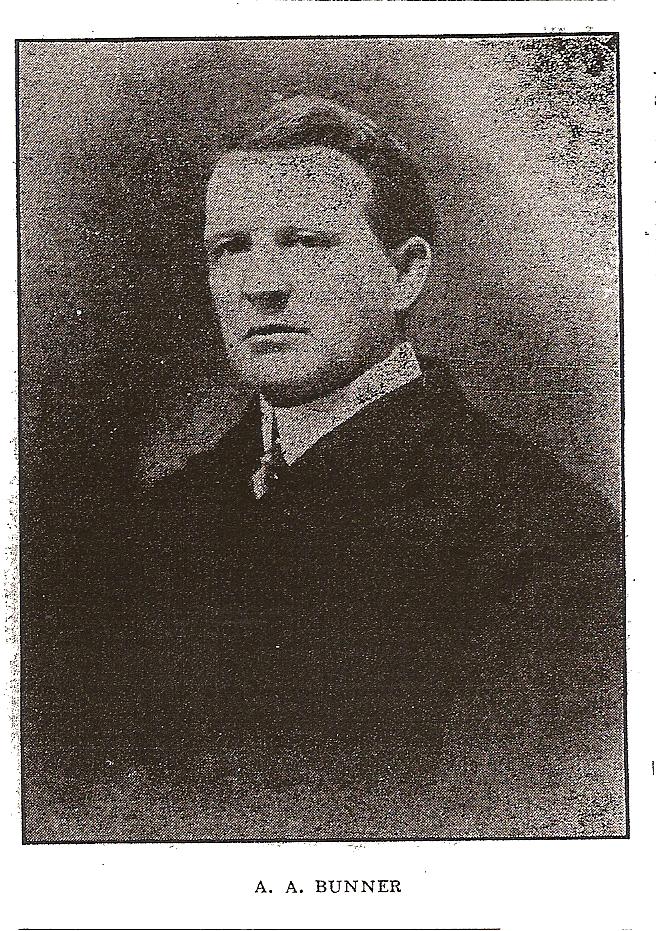 Alvinza Alexander Bunner was born in 1853 on Bunner’s Ridge in Marion County.  The Civil War had taken many of the available preachers and teachers so Bunner, out of necessity, began preaching at a young age.  In 1872 he married Lucinda Monroe of Coal Lick Run, Mannington.  Fourteen children were born to the Bunners.
Bunner was a well known preacher of his day.  He preached throughout West Virginia, Ohio, Pennsylvania, and Indiana.  Records exist of him  being located in Fairmont, WV, Johnstown, PA, Pittsburgh, PA, Graysville (Monroe County) OH, Mentone, IN, and Cleveland, OH.  Of particular interest is a meeting he held at Daybrook (Monongalia County) in 1910 in which 101 people were baptized.  Bunner held the first gospel meeting for the Blueville (Taylor County) congregation in 1911.  During this meeting some Mormons challenged him to a debate. As a result of this challenge, the Bunner-Rich debate was held in Fairmont in 1912.
Bunner participated in many debates.  While living in Pittsburgh, Bunner had challenged Charles T. Russell, founder of the Jehovah’s Witnesses, to a debate.  Russell refused to debate Bunner because he was not a member of the Disciples/Christian Church.but eventually Bunner helped arrange a debate between Russell and L.S. White in Cincinnati in 1908.
Bunner was well known as a writer. Two of the journals in which he wrote were the Gospel Advocate  and the Christian Leader .  He also published his own paper entitled Fire and Hammer.  In 1924 he wrote a booklet entitled The Race Problem.  In this booklet he encouraged Christians to throw off racism and treat all men equally.  This booklet was written while Bunner was living in Cleveland .
A.A. Bunner passed away on May 8, 1927 while living in Cleveland.  He was an important figure in the church’s history in this part of the country.  Through his preaching and writing he influenced many of his generation.  His legacy continues today. 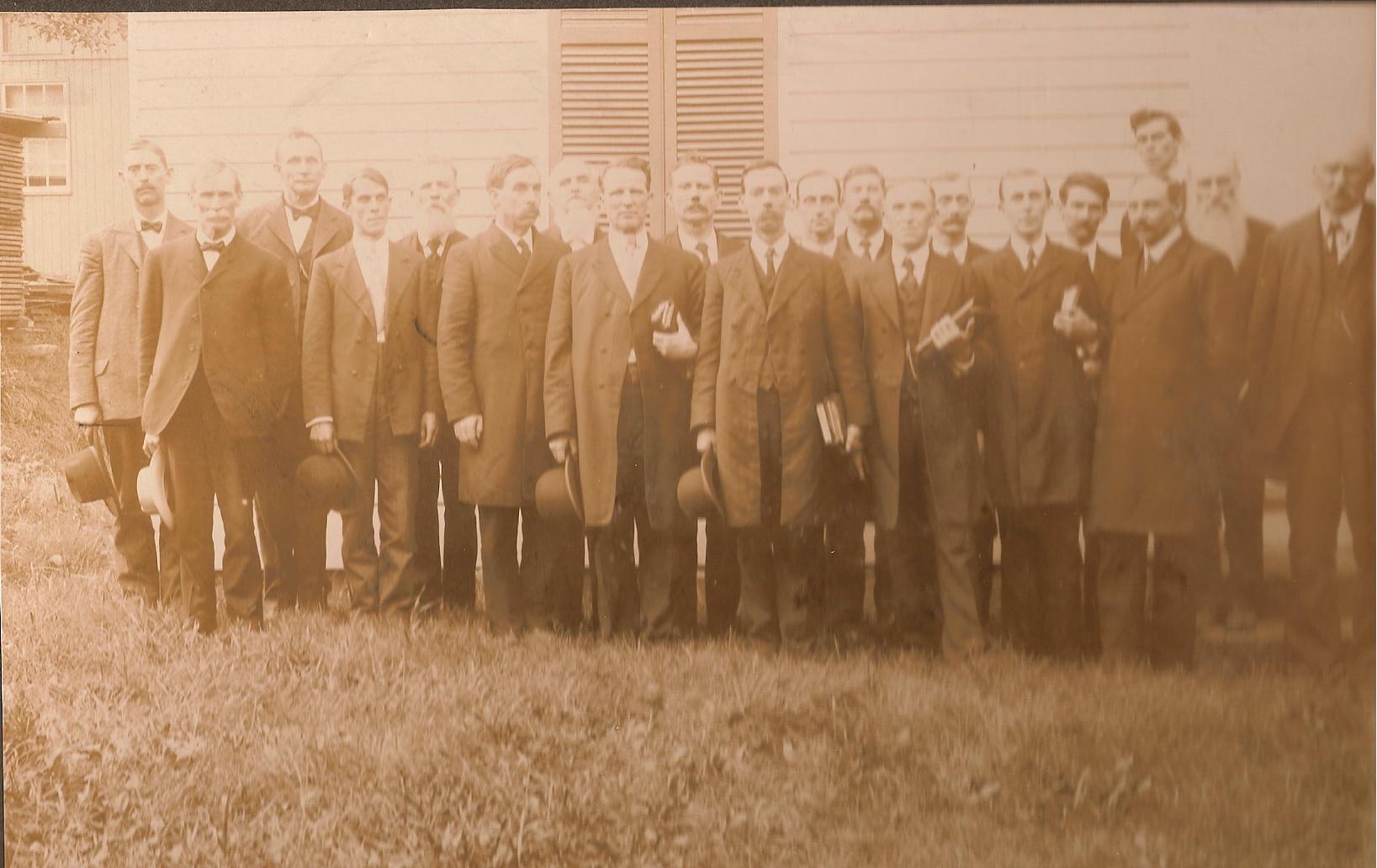 Group of Preachers at McConnellsville, Ohio Early 20th century
A. A. Bunner is fourth from the left on the front row.
A review of The Race Problem Historically and Scripturally Solved With Special
Reference to the Negro Race and the Church’s True Attitude Toward Them
by Brent Gallagher
Author: A.A. Bunner
Pages: 14
Date: 1924
Publisher: Williams Printing Company: Nashville
Bunner begins his book describing the “Origin of the Colored Race.” He notes that even though humans are generally divided into “the Black, or Egyptian Race; Yellow, or Mongolian Race; and the White, or Caucasian Race,” there are many other “intermediate types or sub-races.” He states that the variety of human races can be traced back to Noah’s sons and that only minor variations have occurred since then. Bunner explores the possibility that the Black race originated from God’s curse upon Canaan. If this is the reason for the origin of the Black race, Bunner argues, then no one has a right to question God’s providence in the matter.
The next section of the book challenges the church to be more active in evangelism among African-Americans and to break down walls of segregation. Bunner says, “…the Negro is a creature and belongs to that part of creation that needs the Gospel, Mark 16:15, and the Church of Christ is under the same obligation to him that it is to any other creature who is a gospel subject, and we will be held to a strict account for withholding the Gospel from him.” He argues that if one doesn’t love another who is begotten of God (1 John 5:1) then the one who fails to love is not truly begotten of God.  Various biblical passages are quoted to show that Christ has only one church and that all mankind (including African-Americans) is reconciled to God in that one church. These facts lead Bunner to state,” I know no white and colored churches of Christ.” He also says he does not “object to the colored and white brethren meeting in separate congregations as a matter of convenience and expediency, when they are so circumstanced that they can conveniently do so, still, if these separate congregations tend to create an ungodly race prejudice, then these separate meetings are sinful and are destructive of the spirit of Christ and the unity that must exist among the people of God on earth, if we ever expect to enter heaven.” Bunner closes this section of his book with a plea for financial help in obtaining literature for African-Americans whom he desired to evangelize.
Next, Bunner discusses church organization with the purpose of showing the importance of the church and the fact that God wants His church organized according to a pattern. He lists the qualifications for elders, deacons, and deaconesses. He argues that 1 Timothy 3:11 is a reference to deaconesses and that 1 Timothy 5:9, 10 and Titus 2:3-5 describe their work. He also condemns extra-biblical organizations such as the American Christian Missionary Society and the Ohio Christian Missionary Society.
Bunner closes his book with an appeal “To the colored people of the United States of America:” He recognizes the mistreatment of African-Americans through slavery. He challenges them to come to Christ and accept the gospel. The book concludes with a description of the plan of salvation.